David drying the dishes about 1952. Dorothy washed and David dried. (Note the holster at David's waist; he was probably playing outside before coming in to help with the dishes.) He and Jim took turns drying, and 10 years later Glen dried. To make it more interesting, Dorothy usually gave mental exercises while doing the dishes. For example, she took turns asking the boys to name the presidents in order or do chained calculations that she made up them to do in their heads. (E.g., start with 7; multiply it by 3; subtract 8; multiply it by 2; and what's the answer.)

This picture was probably taken on the front steps of Grandma Crammond’s house in Lansing. [Glen] hadn’t been born yet, and Dave and Jim were around 9 and 11. {Dorothy on the left, Grandma Crammond right, Dave center top, and Jim front}

Roy and David Newton. Thought to have been taken Oct 1941

David Newton. Thought to have been taken Oct 1941

David taken in the summer of 1941, judging from his fancy coat, it might have been taken on his 4th birthday.

July 1949 Jimmy, Dorothy, Dave in the back and Perry B, Eva, Charles E in the front. 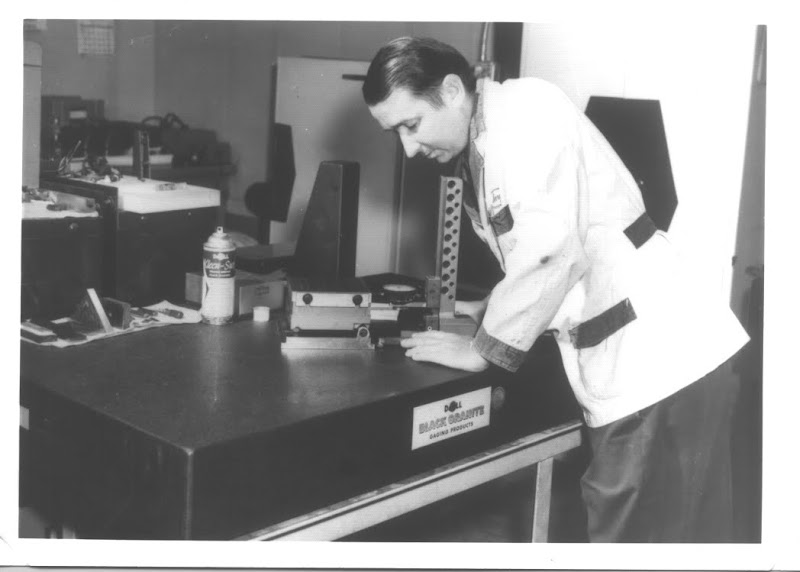 DAVID NEWTON AT WORK AT HANCHETT MAGNA-LOCK IN BIG RAPIDS July 1968
Dave is checking the base plate to the top plate on being parallel from one to the other. Checking hinge-pin--45 degree angle on the 5" sine, permanent magnet. This 5 inch permanent single-angle sine sells for approximately $450. He is working on a black granite surface plate. The surface of this plate is .00005 level.